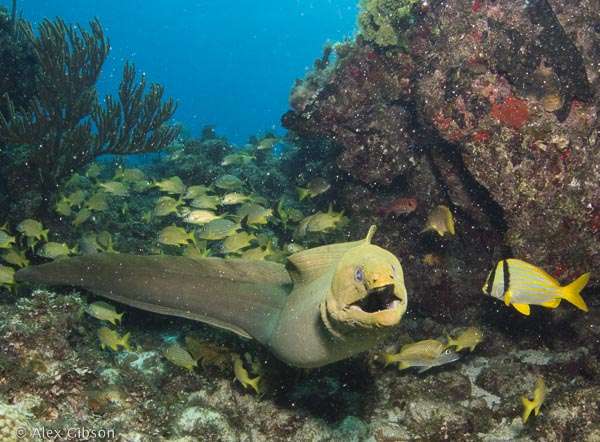 Cayo Largo is a small island off the south coast of Cuba with no indigenous population. It is the opposite of the sort of place I would normally look to go to – a resort entirely fabricated for tourists. However, the diving is good here and after nine days on the go touring Cuba in the full sun the easy life appealed.

There are direct international flights here from Canada and Italy amongst other places. Domestically, it is just a short flight, around twenty minutes from Playa Baracoa airport, west of Havana. However, at check-in, we were informed that we were, in fact, getting there by chopper. Never having flown in one before and nervous about the state of repair of any Cuban aircraft all we could do was laugh at this turn of events. The helicopter ride also took longer – about an hour – than we were expecting, but it was an experience in itself. We weren’t the only nervous passengers, the relief on arrival was palpable. I am reliably informed that the helicopter was a Soviet (now Russian) Mil Mi-8, which is a 1960s design. Although still in production I do wonder what access Cuba has to spare parts…

Diving is one of the main activities but Cayo Largo is also known for its dunes and wildlife. Long, fine white sand beaches are pretty but they don’t hold my attention for very long. However, the hummingbirds which flitted about the flowering shrubs in the gardens certainly did. There is also a Marine Turtle Rescue Center. This is necessary because some of the hotel beaches are important nesting grounds for loggerhead, green and hawksbill turtles. So, if it wasn’t for the hotels there wouldn’t need to be a rescue centre. I’m not going to debate the rights and wrongs of holidaying in such a place, but the least we could do was visit the sanctuary and support the work they are doing there to keep the turtle populations going. If you do go to Cayo Largo please do the same.

The dive centre is based at the marina in the ‘village’, right next to the turtle centre. You can book via your hotel or direct with the dive centre. The dive bus picks everyone up from their resort at about 8 am each morning and drops them back around 2 pm.

Despite diving being one of the headline activities here, not many of the hundreds of tourists were doing it. The highest number of divers on our boat, including two guides, was eight. On the first day, there were just five of us.

The boat was a nice size, with plenty of room. Our guide, Israel, was professional and gave a decent brief before each dive. The general style was very relaxed – as in the Bay of Pigs there were no buddy checks enforced, or pairings sorted out. This is loose-formation diving where everyone follows the leader. If you are used to being allowed to go at your own pace this is a bit frustrating, especially when carrying a camera.

The vis was pretty good despite the recent windy weather and large swells. There was plenty of murky green water as we ventured out to sea but there are obviously places where it was better and these are where we headed.

As we descended the 25m or so metres to the bottom I could see a turtle swim one way and a shark the other. Both were moving away from the dive site and were already too far away to follow. But it was a good sign. Down on the wreck – a small boat so uninteresting I forgot to ask what it was – a large silver fish seemed fascinated by the divers. The guide told me this was a tarpon but I’m not convinced that is correct, it seemed to be lacking the colouration and scales I would expect. Please leave a comment below if you can ID this fish, and excuse the low-quality photo – my camera jammed, preventing me from altering shutter speed.

We also had a free-swimming remora following us around. I’m glad I had a full-length suit on – I didn’t fancy becoming suckered! The dive guides spent a bit of time looking for lionfish. They have managed them very well here, and we didn’t see many. The real reason for the hunt became clearer on the next dive…

You wouldn’t catch me doing this!

The Aquarium is a shallow dive with a mixture of reef and sandy bottom. We had been brought here with the promise that we were going to meet ‘Rachael’. This was more-or-less guaranteed as our guide had brought those fish he had caught on the last dive, neatly chopped and put in a chum tube. Whatever your opinion of the rights and wrongs of doing this, of how it changes/disrupts animal behaviour, it is certainly is an experience to remember.

From the start of this dive, there were plenty of groupers showing a bit more interest in us than normal. Then, we were soon joined by ‘Rachael’ – a two-metre-long nurse shark. I was a bit wary at first and certainly didn’t want to get involved in the touching which was being demonstrated and encouraged. But this opportunity to get close to a shark of any kind is hard to pass up. And she did come very close, making multiple passes until she got the fish she wanted. When she swam off we turned out attention to the reef – to the groupers, moray eels, shoals of grunt and snapper.

Then Rachael would come back, ready for another fish. This went on for some time, with a melee of divers taking photos, twisting and turning. It’s hard not to get involved, but I tried to hang back and get a few nice shots without too many divers in. After a bit of photoshopping to remove the odd fin, there are a couple which I thought were worth sharing and you can see them above.

After the excitement of the previous day, it was going to be hard for any dive to compete. There were some pretty bits of reef on this site, but we spent a good deal of our time deep, on the edge of a wall hoping to see something. We did see a reef shark, but it was always too far away and too deep to really get excited about. I’m not sure I have seen the best of this dive site.

A nice variety of fish

Itay behind purple fan corals, flapping in the swell

This was a much shallower dive and welcome after the morning’s exploits. The early sighting of an eagle ray ticked the right boxes. These guys never seem to stick around and so it proved. We could really feel the wave action on this site, with purple fan coral flapping around. I think the plan had been for us to get over the reef and into the lagoon, but the current prevented that so we drifted back towards our starting point enjoying more of those large silver fish (tarpon?).

The Black Cave is, in fact, a tunnel, and we were not allowed to dive it. Apparently, it is narrow and full of lionfish. Not somewhere you want to go! The topography – drop-offs and gullies – added interest to this dive, but it was the ending that will always stick in the memory. We were back at the anchor line, with those low on air already on their way back up to the boat, when a huge loggerhead turtle cruised by. It was as big as our dive guide, Israel, who excitedly told us afterwards it was in the top three largest he had ever seen. I can believe it – it was easily as big as him (and a good deal wider).

Spinyhead blenny in a worm tube

Before this dive, I asked Israel if we could please go a bit slower, for a change, for the sake of photography. I don’t think I was the only one because what followed was the most relaxing dive of my trip and a perfect way to end.

Again, we saw an eagle ray, which looped around the lagoon, showing up twice. To my frustration, one of our dive guides was busy fiddling with his mask and somehow couldn’t understand my signals as the ray swam right underneath him. Oh, to have been in his position!

I finally got my macro lens on for the second half of this dive and settled into critter joy. It wasn’t hard to find things to shoot – with flamingo tongue cowries, anemone shrimp and a spinyhead blenny just some of the things we found.

There is not a lot of soft coral, so don’t expect it – if you are used to the Red Sea or the Indian Ocean it does look pretty different, with sponges far more dominant, from what I saw. Kit quality seemed very good, but I took my own. The dive guides might be too relaxed for some people.

I currently use an Olympus XZ-2 compact, INON wide angle and macro wet lenses and a single INON Z240 strobe.

Our trip was booked by William Sloot, Cuba and bespoke holiday specialist at Holidays Please.

Alex Gibson is a UK-based diving instructor and keen underwater photographer. He can usually be found diving the south coast of England, particularly in Dorset. He is Editor-in-Chief of Dived Up Publications.

This site uses Akismet to reduce spam. Learn how your comment data is processed.